Once, I was making some DOS figures with quantum espresso by using the sumpdos.x program by Andrea Ferretti (included in the QE package), but I felt that I am missing some features. Thereby, I wrote my own script, which does something similar, but it is much more automatized, it is faster to use, and it even produces ready-to-publish graphs automatically.

So, if you want to plot the DOS with quantum espresso, here are the steps:

I have run these script with the example of the wustite, and the result is the following one: 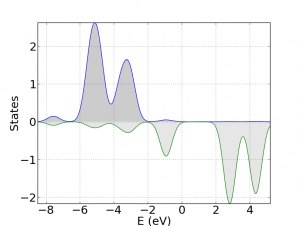 Some other interesting features: