In this post, I introduce my new cube2xyz script for converting cube data into “x,y,z,value” format and optionally creating nice 2D or 3D plots displaying the value of the cube property along a segment or a surface.

.cube files are originally from the Gaussian molecular modeling code, but nowadays can be produced and read by most of the computational chemistry programs. They consist of a lot of blocks of data describing the values of a measured property (charge, spin polarization, electronic density, …) on each point of the space inside the simulation cell.

The cube files are formatted as follows:

Let us think that we want to simulate an isolated molecule in vacuum, but we are not sure of whether our simulation box is large enough to prevent interactions with periodic replica. In this case, we can use the cube2xyz script to plot the data and check that a given magnitude (for example charge, electronic density…) is converged around the molecule.
In the following picture, there is a representation of the charge density of a water molecule on a 10 a.u. (5.29 Å)cubic cell. The command used was “cube2xyz-v0.1.py -f out.char.cube -o xyzspol.dat -x 1 -pl -A” and the result looks like this:

Charge density of a water molecule on a 10 a.u. cubic cell.

The little spheres above the surface represent the projection of the coordinates of the atoms on the represented plane. For example, if we want to display the values of the cube property along the x=x1 plane, the atoms will be represented as “max(property value)+C, y, z”, where “C” is a scaling factor in order to put the atoms slightly higher than the highest surface peak.

If we want to represent the cube property only on one direction, we just have to set the values for two axes, and the value will be represented along the intersection segment of the two perpendicular planes to those axes at those points.
This can be useful, for example, when we want to calculate how much is the minimum amount of vacuum we should add on a top of a surface, so that it does not interact with itself.
This is an example of usage for this case: “cube2xyz-v0.1.py -f out.char.cube -o xyzspol.dat -x 1 -y 3.7 -pl -A ”
And the result will look like this: 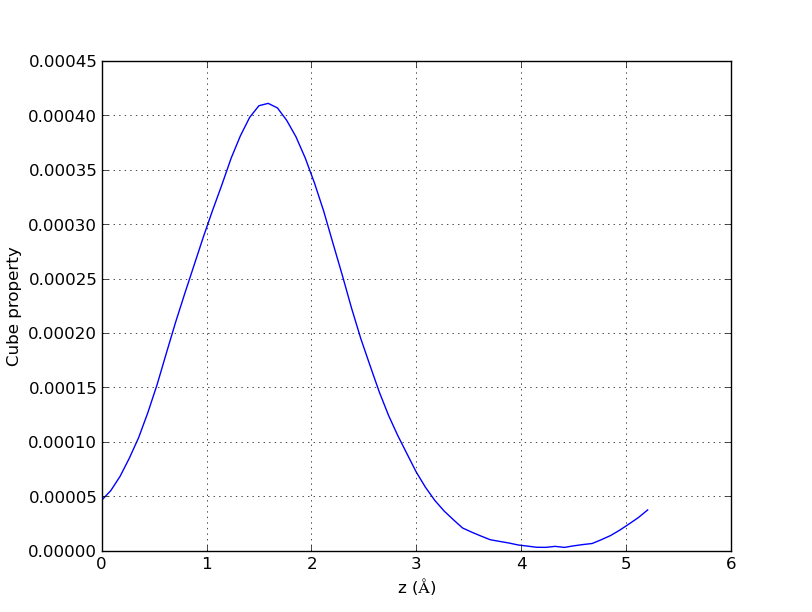 2D representation of charge density of a water molecule along a segment.

The usage information can be as usual obtained with the -h option on the command line, and in this case, it looks like:

The script can be found on my github repository: cube2xyz-v0.1.

The cube files can be easily produced in Quantum Espresso, by running a single point calculation of the wavefunction (SCF) and using the pp.x tool. In CPMD, you can use the cpmd2cube tool.

A final note: the current version (0.1) of cube2xyz only supports orthogonal lattice vectors, so it only works for cubic, tetragonal and orthorhombic unit cells.